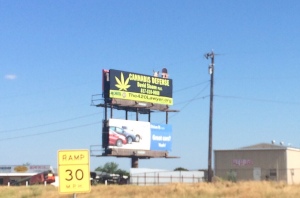 If you were to drive twelve thousand miles a month, zigzagging up and down and across the North American continent, you’d probably notice a few things. For example, America is mostly a big grassy field. Sure there’s an ocean and mountains on the left side and an ocean and ummm… mountains, I can be generous, on the right side, and a muddy river and a foreign land on the bottom. But the middle, that’s mostly grass, a bit of corn and soybean fields, some cotton near the bottom. Canada is mostly swamp, or moose habitat if you like that better. On the eastern slope of the Rocky Mountains you’re likely to see some pronghorn.

The pronghorn, an odd species which was described by William Clark of Lewis and Clark fame, as “more like the antelope or gazelle of Africa than any other species of goat.” But really, they’re most closely related to the giraffe. He’s an odd little guy, and very quick. So quick he’s believed to be the second fastest land mammal after the cheetah. “Ah huh!” Jeered the anti-Darwinists, “if Darwin were correct, no animal could possibly evolve to outrun non existent predators!” But then in the 1970’s they realized that some bones they’d found in a cave in Wyoming were those of an American variety of cheetah. So I suppose those cheetahs had a rough go of it during the last ice age and life got a lot easier for the pronghorn. And of course we know that Americans hunted any other predators that may get lucky and catch a pronghorn, such as wolves and mountain lions, to near extinction. So these days the pronghorns are living the good life, lounging and grazing. Those are some happy little giraffes.

I was thinking about all the zombie movies and tv shows that’ve been so popular, and it made me think of the customs officer that confiscated my tomato’s the other day. I think I’d rather fight zombies than follow idiotic rules about tomatoes. Bring on the zombies.

Trump’s tariff war is heating up. I usually try to avoid writing anything political because I like people to read what I write, and I don’t care enough to argue about it, but I’m gonna make a controversial statement. I think a trade war is a great idea. Ever since Ronald Reagan our politicians, of all political stripes, have been fully on board with free trade and globalization. The result has been that whoever is the most desperate and willing to work for the lowest wage gets to make the stuff we buy and the food we consume. And if a company can find someone even cheaper, they move to that country. That’s not good for human beings anywhere, it’s barely even good for shareholders. Could this be bad for truck drivers? Maybe, but don’t worry about me. Meanwhile, vast quantities of diesel are consumed to get all this stuff across oceans and continents. If you’re an environmentalist, this could be the best thing that’s happened in years. Don’t tell Trump though.